OhMyBingo’s guide to the different bingo variants will take you through 75-, 80-, and 90-ball bingo, as well as the new 52-card version that’s springing up on sites everywhere. Always wonder how 75-ball works, or why you might hear a bingo caller shouting out “B-9”? Let us enlighten you!

75-ball bingo (sometimes called American bingo) is far more popular in the US and Canada, but the rest of the world is quickly catching on. Many UK bingo sites now offer 75-ball bingo rooms, though they usually only have a couple, as 90-ball still dominates the game. As the name suggests, 75-ball bingo is played with balls numbered 1 to 75, so there are slightly fewer balls in play than the other bingo variants. 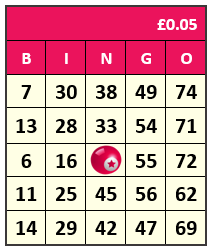 Cards in 75-ball bingo are made up of a 5 x 5 grid with a free space in the middle. The numbers are organised like this:

When playing 75-ball bingo, you can buy multiple cards for a single game, and mark them all off at once as numbers are called. If you are playing online, the sites will have the computer mark your cards for you.

If you’re marking the cards manually (for example, in a physical bingo hall), this means you might have to check quite a few cards when a number is called! Don’t panic- to help you find the numbers faster, they are often called with the letter for their column, for example “B-7” or “N-58”. If you’re playing online and the numbers are shown rather than shouted out, this might be done using colours.

You can win in different ways with 75-ball bingo, depending on how the game you’re playing is set up! When you join a game, look to see what the prizes are awarded for. You might be aiming for a line (straight across), a coverall (all the squares on your card), or sometimes a game will want you to match a pattern.

As a further bonus, some games will offer a big jackpot (even up to thousands of pounds!) if you win within a certain number of calls!

This game is much rarer than 75- and 90-ball bingo. Many bingo sites don’t offer it, so if you find a site that does, you know they’re switched on to their bingo players’ needs! 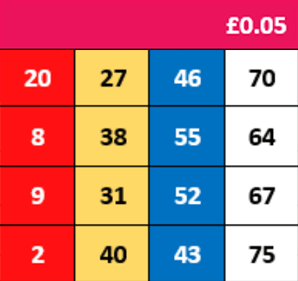 When playing 80-ball bingo, you’ll get cards in a 4 x 4 grid. Rather than letters like 75-ball, the columns are labelled with colours. They are organised like this:

Like 75-ball, you can buy multiple cards for each game in 80-ball bingo. Mark your cards as the numbers are called (or let the computer do it for you if playing online). The numbers will match the colours on your columns, so they are easier to find.

Almost all 80-ball bingo games will give prizes for matching columns rather than rows. There will likely be a prize each for the first players to match 1, 2, and 3 columns, and then a prize for the first to get all four columns (sometimes called full house or coverall).

This is the mac-daddy of bingo games! Nearly all bingo you see on UK bingo sites and in UK bingo halls will be 90-ball- it’s by far the most popular here in Blighty. It’s not just the Brits though; Australia and Asia are known to love 90-ball bingo too. As you might guess, it’s played with 90 numbered balls (surprise!). Those quirky bingo calls we all know and love (legs eleven! Two little ducks!) are specific to 90-ball bingo too!

90-ball bingo cards are usually called “tickets”, and they are a 9 x 3 grid. You will notice blank spaces- no, the website hasn’t messed up! 90-ball bingo tickets have blank spaces like this, but there will always be five numbers in each row. The numbers are organised like this:

When buying tickets for a 90-ball game, you are often able to buy a “strip” of six tickets. On this strip, each ticket has unique numbers, so none of your numbers will be repeated on the same strip. Mark your numbers as they are called!

Winning means matching horizontal lines in 90-ball bingo. You can usually win a prize by being the first to match one line, two lines, or all three lines for the full house.

This relatively new version of bingo is quickly gaining popularity, and more and more sites are adding it to their bingo lobbies! It is played with playing cards rather than numbered balls, and is run a little differently to classic bingo. Going by more names than P-Diddy, you might hear it called Flash Fives, Foxy Fives, Cinco, Bingo-52, Bingo Vegas… Phew!

Example of a 52-card bingo hand

With 52-card bingo, instead of a grid with numbers, you’ll get a strip (or hand) of five cards. Think of this like a bingo ticket.

You can always buy multiple hands for each game, just like bingo tickets, but different sites have their own way of running the show when it comes to 52-card. One thing they all have in common is that you’ll never get the same card twice in a single hand. Think about it, it would be like having the same number twice on a single bingo card.

Some sites will limit you to a maximum of five hands per game, but you’ll get no duplicate cards at all (basically you’ll get 25 different cards, split into five groups).

Other sites will let you buy up to 96 hands per game, but of course, the same cards might come up more than once across all your hands.

The caller will pick cards at random from a 52-card pack, and your cards will be marked or covered if you have a match. Winning is simple- just cover all five cards in a hand, and that’s bingo!

That’s a lot of bingo!

Hopefully you now feel ready to explore and take on new and exciting bingo games! If you’re eager to know more about online bingo, take a look at our other help pages and guides below.

Ready to find a bingo site you’ll love? Check out OhMyBingo’s reviews to find the perfect site for you!